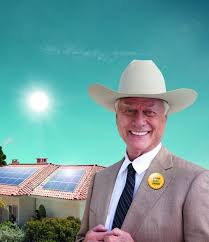 “Shine, baby, shine,” chuckles a fiendish Hagman as he coins the new energy mantra for our time in a series of advertisements for SolarWorld. He’s playing off “Drill, baby, drill” of course, but few can argue with his message.

Serving on SELF’s board since 2000, Larry walks the talk. In 2003, he installed what is surely the largest residential solar system in the United States, if not the world, at his hilltop home in Ojai, Calif., north of LA. The combined arrays on his property total about 90 kilowatts.

Now with his catalytic involvement in SolarWorld’s advertising campaign, he has leveraged his passion for solar energy to help SELF as well. Through its Solar2World donation program to aid communities in developing regions, SolarWorld donated solar panels to SELF for a Partners In Health (PIH) clinic in Haiti in 2009. After an earthquake devastated Haiti on Jan. 12, SELF was among nonprofit aid groups that SolarWorld agreed to supply with even bigger panel donations to ease the Haiti crisis. Thanks to Larry’s efforts, SolarWorld’s generous donation of 100KW of solar panels will power five more clinics in Haiti. For SELF, this is an integral part of our overall solar healthcare partnership with PIH.

Thank you, SolarWorld, and thank you Larry.

Update: In June SELF completed solar installations at two more of the clinics operated by PIH’s Haitian counterpart, Zanmi Lasante (ZL).  And the solar industry, too, deserves tremendous credit for stepping up to help. The 5.8 kW solar-diesel hybrid system at the Hinche clinic was made possible by generous in-kind donations from the Solar Liberty Foundation and Sunsense Solar. At Cerca la Source, SELF technicians installed a 10kW system with panels donated from Q-Cells SE, and money donated by Good Energies Foundation helped fund the balance of materials. At the Cerca la Source clinic, one of the key goals was to improve security by using outdoor night lighting throughout the grounds. We’re finding, though, that solar power brings many other benefits. Within minutes of the first lights coming on, our project director saw a small boy standing underneath them, reading a book. That’s the power of solar.