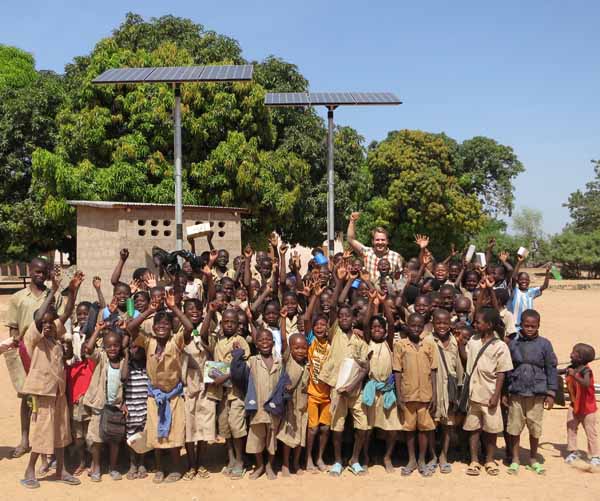 “Access to electricity is fundamental to opportunity in this age. It’s the light that children study by; the energy that allows an idea to be transformed into a real business. It’s the lifeline for families to meet their most basic needs. And it’s the connection that’s needed to plug Africa into the grid of the global economy. You’ve got to have power. And yet two-thirds of the population in sub-Saharan Africa lacks access to power — and the percentage is much higher for those who don’t live in cities.” – President Barack Obama, Remarks at the Uni. of Cape Town, June 30, 2013

The satellite image of earth at night says it all: Except for a few urban areas scattered here and there, essentially the entire continent of Africa is shrouded in darkness. In many sub-Saharan African nations, as much as 90% of the rural population lacks access to electricity. No lights. No refrigerators. No computers. Nada, Zippo, Zilch.

Nearly twenty years ago, I witnessed a family living in a very poor and remote village in western China flip a switch and experience electric light for the first time in their lives. That encounter was a life-changing event; it made me realize just how transformative electricity can be to people living without access to modern energy services.

Since then, I’ve dedicated myself to eradicating energy poverty through my leadership of the Solar Electric Light Fund. International development work is inherently difficult, and installing solar equipment in some of the most remote locations on earth, even more so. Yet, for all of the trials and tribulations of working in difficult environments, for me there has been no greater reward than helping rural communities improve their lives through the use of solar generated electricity and seeing them flourish after they flip on that power switch for the first time.

When I read that President Obama had introduced his administration’s new Power Africa initiative, I was excited at the prospect of more lights being turned on in Africa, more children being able to go to school and access online resources, more patients being treated and vaccinated at rural health clinics, more farmers finding ways to ensure their own food security, and more small entrepreneurs launching new businesses.

Power Africa will commit more than $7 billion in financial support over the next five years from the U.S. Import-Export Bank and Overseas Private Investment Corporation. An additional $9 billion will be leveraged in private sector commitments from initiative partners that will support the development of more than 8,000 megawatts of new electricity generation in sub-Saharan Africa.

For those of us in the international development community who have been fighting energy poverty, this initiative is a big deal. Combined with the UN’s Sustainable Energy for All Initiative—whose primary goal is to ensure universal access to modern energy services for the world’s poor by 2030—Power Africa can help make a significant contribution to the challenge of providing electricity to those who have none.

Although the bulk of the initiative seems to be focused on developing electricity services for those that live in or near urban areas, it is important to note that the vast majority of people who suffer from energy poverty live beyond the reach of a traditional power grid. These folks are not likely to have access to grid electricity anytime soon due to the exorbitant cost and logistical difficulty of extending power lines to remote parts of the world. Solar and other renewable energy‐based power systems offer the best solution in meeting the current and future energy needs of off-grid communities as they can be installed in very remote locations and do not have to be tied to a utility grid.

Solar electricity may be used to power stand-alone applications such as household lighting systems and appliances, or alternatively, to power larger facilities such as schools and health centers. It can also be used to pump and purify water, irrigate crops, run computers, and power small businesses. When combined with wireless communications, solar energy can also put the world’s ever-expanding database of knowledge at the fingertips of every child on the planet, no matter how remote or isolated he or she may happen to be. And now, thanks to recent advances in inverter and smart metering technology, solar microgrids are quickly becoming a cost-effective solution for powering entire villages or even clusters of villages in the developing world.

Achieving the goals of the Power Africa initiative will require creative thinking, innovation, expertise, and cooperation. Working with government, private sector and non-governmental organization partners, SELF has built a track record of successful solar electricity projects in more than 20 countries around the world, enabling us to develop innovative applications of solar energy, with impacts to economic development, education, health, and agriculture. By working collaboratively to develop innovative approaches in providing solutions for people living in energy poverty, we can support a path to prosperity, driven by the community itself.

I believe that energy is a human right. Without it, there is no way to light homes, pump water, store vaccines, run computers, operate machinery, or communicate with the rest of the world; it is a cornerstone of modern civilization.

For many communities that lie beyond the reach of a conventional power grid, solar energy offers the greatest hope to provide the power they need to improve their lives. I believe that SELF’s approach in implementing solar energy systems to power virtually every aspect of community life can be replicated around the world to help lift people out of poverty and secure a brighter future for themselves and their children.