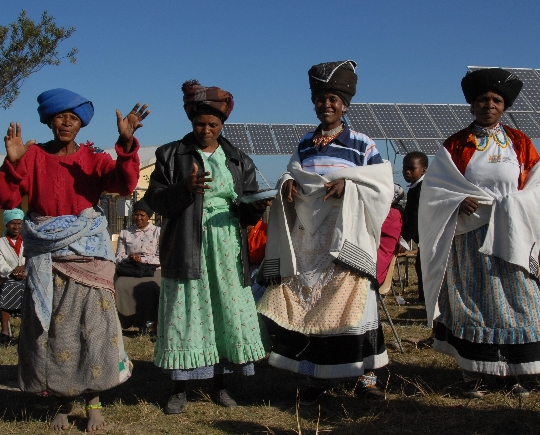 In South Africa—fifteen years after the end of apartheid—poverty still predominates in much of the rural areas, especially in the Eastern Cape, the birth place of Nelson Mandela.  While the South African Department of Education has a mandate to provide computer literacy skills to all high school students by 2012, the fact remains that some 16,000 schools in South Africa still lack access to electricity.

The challenge of providing electricity to so many rural schools in South Africa is not likely to be met by ESKOM, the country’s largest electric public utility, considering that ESKOM is having increasing difficulty keeping up with its current demand, and last year introduced load-shedding and rolling black-outs as a way of dealing with the nation-wide shortage of electric power.

Building on the success of a previous initiative in the KwaZulu/Natal region of South Africa, where Myeka High School—located deep in the Valley of a Thousand Hills outside of Durban—became the first rural, off-grid high school in the country to be equipped with a solar-powered computer lab, SELF teamed up last year with several local partners to bring solar electricity and wireless Internet access to three remote schools in the Eastern Cape.

With funding from the Kellogg Foundation and JPMorgan Chase, and with additional support from Dell, eKhaya, LearnThings, and Dabba Telecommunications, we installed a 4.5 kilowatt solar system at Zwelenqaba Senior Secondary School, located near the town of Coffee Bay on the “wild coast” of South Africa.   The solar system is now powering 25 laptop computers that were donated to the project by the Dell South Africa Development Fund, as well as a printer and several other peripheral appliances.  In addition, two nearby Junior Secondary Schools, Bafazi JSS and Kwa’Ntshunqe JSS, were equipped with smaller solar sytems and computer labs.

All three schools are connected to each other by means of a solar-powered WiFi mesh network, as well as to the Internet via the local cellular network.  The Video-In, Knowledge-Out (VIKO) server donated by Dabba Telecommunications contain 1500 hours of interactive video lessons.

LearnThings provided training for the teachers on how to integrate computer skills and online learning into their curriculum, while eKkaya ICT has been working with Zwelenqaba and the two nearby junior secondary schools on a program of cultural exchange and remote training via the Internet.

An official launch of the project took place on August 1, 2008.  I traveled to South Africa to join in the festivities and to check out the completed solar installation.  To get to the school, one has to fly from Johannesburg to Mtata in the Eastern Cape, and from there, drive for two hours on a paved, then dirt road.   By the time my colleague Rael Lissoos from Dabba Telecommunications and I arrived to the site, it was already dark, but the computer lab shone brightly.   And the computer instructor was eager to show off the brand new Dell laptops before storing them away for the night in the safe that we had provided to the school.

The launch could not have gone better.  The kids are ecstatic to have electricity and computers at their school, and they’re eager to soak up all kinds of new information.  Soon they will have a webcam in the classroom, and we’ll be able to videoconference with each other!